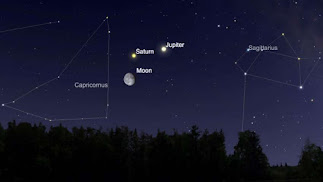 Over the past few weeks, I’ve seen multiple posts and articles regarding the planetary conjunction of Jupiter and Saturn, which is set to be at its closest proximity on December 21, 2020, which is also the winter solstice.

Many Christians are attempting to tie this alignment to something positively prophetic, and some are even calling it the return of the “Star of Bethlehem.”

First, let me start off by saying that the conjunction that is happening is in fact NOT in association with what was known as the star of Bethlehem. This is due to the fact that although Jupiter, which is also called the “king planet” was a part of the star of Bethlehem alignment, Saturn was not. Through mapping the history of planetary alignments, it is believed that it was Venus (also deemed the bright and morning star) that was a part of the conjunction that led the Magi to Christ. The wise men, or “Magi” where the Chaldeans that first settled in ancient Mesopotamia, later called Babylon, and were known for their understanding of astronomy, medicine, and literature.

But the more important thing I would like to address is what perhaps is the meaning of this conjunction happening at the end of a tumultuous year…and it has absolutely NOTHING to do with holiness.

As I stated earlier, Jupiter is known as the “king planet” according to Babylonian astrology, and depending on the planetary conjunctions, Jupiter was often associated with the incoming of a new king (hence, why the Magi knew a king had been born in Judea around 4 BC).

Saturn’s association, however, has to do with something even more unique.

In Roman mythology, Saturn is known as the god of wealth, agriculture, peace and liberation (through war). He was often depicted as the god of the “Golden Age” which was associated with a time of plenty and peace. But Saturn worship goes back further than Rome. In fact, Saturn’s original Babylonian (or ancient Mesopotamian) name was Ninutra; who was worshipped as the god of agriculture and war. Ninutra was also known as “The Mighty Hunter”.

Ladies and gentlemen…Ninutra is none other then, Nimrod! 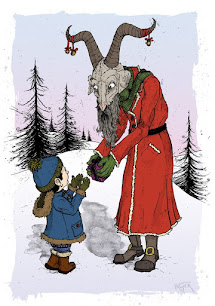 Scientifically, the winter solstice is when the earth’s poles (north and south) are at its furthest tilt away from the sun, hence produces the longest night of the year. In paganism, the winter solstice is represented through the “yuletide” which is the celebration of the rebirth of the “Great Horned Hunter god” in a time of darkness, and is demonstrated through the image of the yule goat. The holiday décor consists of evergreen garland, wreaths, holly berries, mistletoe, candles, pine [trees & cones], gifts, and the burning of the yule log.

When we look at the biblical meaning of the goat, it is depicted as someone who has gone astray, or has rebelled. It also represents sin as the scapegoat. Thus, we get the image of Satan who is also called the "goat head" or as others know as Baphomet.

In Genesis 1:14 it states, “Then God said, ‘Let there be lights in the firmament of the heavens to divide the day from the night; and let them be for signs and seasons…’”

When read in Hebrew, the word “sign” is  אוֹת (owth), which would properly translate into “omen” or “miracle.”

The word “season” is יָעַד (moed), which is properly translated as “appointed times.”

So in other words, God created the sun, moon and stars for omens[signs] and appointed times[seasons].

I would like to add that the planetary conjunction of Jupiter and Saturn are also within the alignment of the constellation Capricorn, whose image is also that of a goat…during the winter solstice (yule goat). Also, it will take place during the crescent moon phase, which is a time of high sorcery symbolizing "rebirth". You will find that in the image of Baphomet, crescent moons are at his ascending and descending hands.

So what is all of this saying?

If I were to tell you a story of what is aligning in the heavens at the end of a year that literally began the end of everything we considered “normal,” it would go like this…

The heavens are telling us that there is a king that is about to rise, who will bring about a New Age of unity and [false] peace. He will be a great man, one who conquers (as the great hunter, Nimrod), but his image and character will be that of the goat (Satan); born forth in darkness, cult, and deceit.

It is the sign of the rise of the Beast.

Several months ago, I did a two-part audio podcast called; “The Rise of Babylon & The Return of Nimrod.” In this podcast, I go through the history of pagan religion and how it all started with Nimrod, and at the end, the rise of the Beast (antichrist) will also be a depiction of the return of Nimrod worship.

On October 3, 2020, the Lord spoke to me and said, “Tell my children that a season of great testing is coming. Those who remain in Me will endure and come out victorious. But those who are not rooted in Me will lose faith and fall by the wayside.”

Saints, we are entering into a time of persecution, and many are not prepared. We are at the precipice of the end of the [church] age, and the great tribulation. And although the Bride is not appointed to wrath (1 Thessalonians 5:9), it does not mean that we will not see and experience trials and persecution. What has unfolded in 2020 should be proof of this. Yet many Christians are still living under the illusion that we're NOT at the end of the age, that good times are still ahead, the great awakening (which is a new age term used in the church) is coming, and America will be great.

These are all lies. Trouble is coming...trouble is already here. And for many, it will overtake them as a flood.

We need to make sure in the coming year that we are ground-rooted in the One who is unshakeable (Jesus Christ), because all things are about to be shaken.