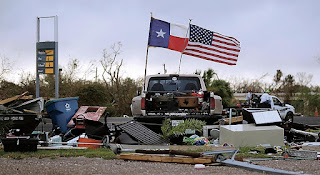 I would to share several things that the Lord has shown me within the last week.

But I would like to start off by saying that we need to be in prayer for the state of Texas, as they recover from Hurricane Harvey. I was sent a clip on Facebook from a follower, of one of the last videos I did in September of 2016 called, "The Coming Sign". In it, I talked about a judgment I saw over the cities of Dallas and Houston, in the form of a hurricane.

We also now have "Irma", which is predicted to be a category 4, or even 5 hurricane, potentially threatening landfall on either the east coast or, God forbid, the gulf coast again.

On the day of the eclipse (August, 21st), I did a Facebook live video and told the people that judgment had begun on this country, and not to let anyone tell you this was not so. In the fifteen minute video, I spoke on how it was time for us to truly repent and cry out to the Lord. We are not in a reprieve, and the Lord has not relinquished on His judgment of this nation.

In between those four days, the Lord spoke and told me that a pestilence/pandemic was coming. And this wasn't the first time He spoke this to me. In June of 2016, I posted that I was told that chaos was going to erupt in the country (I saw Obama with "chaos is coming" written on his forehead), as well as a pandemic. However, I wrote that I was told that it was two separate events, and wasn't given a time frame.

In the wee hours of Monday, the Lord said "The pestilence is coming..."

A couple of days later, I had a vision where I saw cars being used to kill. Now we know that this has already been the case in Europe, with members of ISIS using vans and trucks to plow into crowds at tourist attractions. I wasn't shown that it would specifically be ISIS (not that it's to be ruled out), but that we would see something similar here. I not only saw cars being used to hit people on sidewalks or in crowds, but also used to ram other cars, with the intent to kill.

Also I was shown that with the things that are unfolding, and will soon unfold, there will be an major impact on the economy.

Pray for repentance and revival in America. And pray for the people of  Texas.