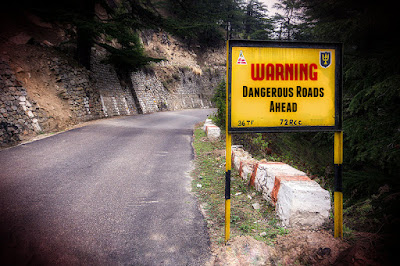 I would like to share with you a dream that I had regarding the path that America is headed on...

Not too long ago, I had a dream that I was in a car on a road trip. I was in the passenger seat, my son was in the back seat, and Donald Trump was driving.

We were driving on a narrow, winding road through what looked like the Rocky Mountains. It was a clear, sunny day.

I had a large road atlas (remember those?) in my hand, and as time went on, I noticed that we were starting to head in the wrong direction. So I looked at Trump and said, "I think we missed our turn, and we're going the wrong way."

But Trump insisted we were on the right path. I told him to look at the map so he could see what I was talking about. But Trump became hostile and started yelling at me about what he knew, how he didn't need a map, and knew where he was going.

As he continued driving, the road began to change, and next thing I knew, we were no longer on a paved road, but now a gravel road full of sharp rocks and thorns. The car began to rock as Trump continued to drive at the same speed as the paved road. I became frightened, thinking the tires were going to blow, and I once again attempted to get Trump to look at the map; but he refused.

We soon came to a four-way stop. Trump picked up a beautifully polished wooden box from under his seat, turned around to the back seat and handed it to my son.

My son proceeded with opening the box; at which another compartment was presented. He opened that one, then another, and another. The polished wooden box seemed to be a puzzle of some sort. Finally, my son reached the center of the box, to only find a small white box inside. Trump insisted that my son open the small white box; so he did.

Inside was a beautiful gold chain with a large gold Star of David hanging from it. My son's eyes were full of excitement.

My son nodded his head.

"You've always wanted one of those huh?" Trump asked with enticement in his voice.

My son nodded his head a second time.

Trump then turned to me and said, "See, this is how I'm going to lure them in. I will give them what they're asking for, and then I'm going to pull the plug." He then turned around and started driving again.

My heart gripped with fear...I knew he was talking about Israel.

Night was quickly approaching, and I no longer knew where we were. The dream ended with us coming to a dead end, with no lights, and no where to turn.

There are several interpretations of this dream; none of which are positive. As the Body of Christ, we truly need to stay in a constant state of prayer. This is NOT a time to slumber. God has NOT changed His mind, and the end of the age is NOT on pause. As individuals, we need to stay before the Lord and seek Him for instructions, and stop following man. Time is running out.