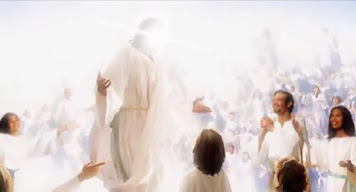 I want to share with you what the Lord allowed me to see regarding the rapture (harpazo: Greek - to seize upon, to snatch away or take to oneself. Found three times in the New Testament: Acts 8:39, 2 Corinthians 12:2-4, 1 Thessalonians 4:17, Revelation 12:5).

At first, I was allowed to experience the "catching away". I heard a loud sound; it was that of a trumpet, but more like a shofar. I was looking up at the sky. I remember seeing the clouds part as a glowing light broke through. I began to ascend quickly. I remember calling the name of the Lord over and over as it seemed I was picking up speed. I saw others, but I couldn't see them clearly. It was like I saw white silhouettes of people being pulled up with me (perhaps this had to do with the transformation that takes place mentioned by the Apostle Paul in 1 Corinthians 15:52).

I then found myself in a place, a great hall, full of people. There was a quiet hum of chatter; somehow peace radiated from it. It was the voices of the people greeting one another with joy. I looked through the endless crowd. I then noticed that to my right there was a more dense crowd, as if they were surrounding someone. My attention was drawn towards them. Somehow as my focus became directed at them, the crowd began to disperse. They made a pathway of sorts, almost like they read the curiosity of my mind to know who they were gathered around.

As the path cleared, there He stood: Yeshua. Dressed in a beautiful floor-length white robe, that seem to shimmer with lights, He had a gold crown upon His head, and a gold sash tied around his waist. He was absolutely stunning!

We made eye contact, but I chose not to approach Him (I've often said to the Lord that if I made it home; if I had done enough to please Him in this life that He saw it fit to allow me to return to Him, all I wanted was to just be able to make eye contact with Him, and the only thing I wanted in return was a smile. That's all I needed. It would be our way of communicating; our way of  simply saying, 'I made it'). Yeshua looked at me with those piercing eyes, smiled and nodded in greeting.

I have not seen much of heaven. I was taken to the Throne Room of the Father back in August of 2014. That experience was granted to me after I complained like a spoiled toddler about never seeing heaven when Christ inquired about His desire to take me into hell. However, heaven has never been a place that I felt far from. In other words, I've been a person who has spent much of her life looking up: never being able to fit in this life; always being deemed strange, peculiar, eccentric, even an "old soul". I stood out from childhood. I didn't have many friends, but I talked to angels. I always knew that I came from a place that wasn't here. Even when I attempted to run from the breath of God that was continuously on the back of my neck, I simply couldn't. He owned me. And there was a point in my life when I despised that fact. He would allow me to stumble, fail, be misunderstood, humiliated, and often rejected because He was jealous over me. He never wanted me to conform to this world, nor would He ever allow me to obtain earthly power, fame, nor riches so that I would always be reminded that I didn't belong here. Thankfully, years later, I live by the simple rule of, 'what the King wants, the King gets', and there are no exceptions.

I was allowed to see a glimpse of the aftermath of the rapture (harpazo) here on earth.

I saw an unknown highway here in the United States. There were wrecked vehicles piled up everywhere and some were on fire. I given the understanding that the mass accidents was not so much because too many people had disappeared, but because a person in this car, or that truck, even a public bus driver had been taken, so it caused a chain reaction. The strange thing that was revealed to me while seeing this was that no one died. No one was allowed to die that day, as if placed as a testament to what had taken place.

I then saw scientists and governments come together to try to explain the phenomenon that had taken place. They came up with the conclusion that is was an alien invasion. Announcements were broadcasted across televisions, cell phones, and internet that we now knew the answer to the "long-awaited" question of whether or not we were alone. I was made aware that there was previously another type of pledge/pandemic that rolled out after covid. The pressure to get vaccinated and tracked had spread worldwide. The leaders used what had transpired as a bridge to introduce a new biometric system that would count and track the people. I heard leaders say that just as it was important during the pandemic that people worked together, even more so now. And that is was important to get the biometric ID so that they could keep track of everyone so that no one else could disappear. It became a worldwide mandate and no citizen was allowed to function in society without it.

In another scene, I was looking through a small window. Outside, I saw complete chaos. Everything was moving at rapid speed, as if someone had pressed the fast-forward button on a movie. I saw people in great distress, famine, disease, and much death. I saw meteor showers of fire falling upon the earth, massive earthquakes, and worldwide droughts. I saw military tanks and soldiers from many nations marching to war. Then finally I saw the sky part and The Lord of Hosts with ten thousand, thousand of His elite returning to earth. I saw His foot touch down on the Mount of Olives, and as the ball of His foot touched the earth, a light blasted from Him and split the ground in two. The window then closed.

The message that the Lord wants me to give to the church is that, He is coming. And too many of us are still not ready. Many will be left behind simply because they did not search His word for the truth that He will call His Bride from the earth. There are too many that are distracted with recycled earth-bound prophecies from those who are seeking their kingdom in THIS life, instead of that of the next. Too many are caught up in irrelevant things, debates, and arguments that they have deemed relevant, yet do not bring in the harvest. The Lord said the majority of those who are shouting "revival" hearts are dark, and most don't even hear His voice. The Lord said that a time of famine is upon the land: a famine for the Word of the Lord. This is a season of quiet. The storm is already upon us, and warnings have already gone forth. So don't find yourself caught up in searching for the prophetic in people; what you will mostly find is that which is false. Seek Him. Repent of the wickedness of your heart and turn to Him, and He will set you free. The Lord said many are still battling with bitterness(unforgiveness), fear, perversion, and pride. Seek Him while you can yet still find Him, for the door is closing.

As with all things, take this to prayer for confirmation.
Shalom
Mena Lee Grebin
Faithful Walk Healing Ministries