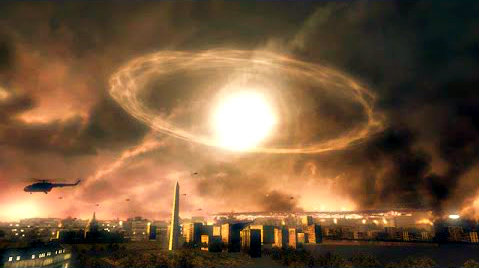 I would like to share a dream that I had while in Wisconsin, during one of my conferences. This dream occurred in the first weekend of November, right before the election.

In the dream I was standing outside, at a side entrance of a building with three other people. We were standing on a ramp, chit-chatting about the day. It was a warm beautiful afternoon; the sun was shining, and there wasn't a cloud in the sky. All of a sudden something was detonated high up in the sky. There was a bright flash, and then a pulse. I looked up to see where it came from. High up, I saw a plume of gray smoke from where the detonation took place. I urged the people that were with me to quickly go inside. We opened the double glass doors, and quickly pulled them closed as the smoke began to descend. Once we were inside, I waited for the smoke to clear; it seemed to cover the area for quite some time.

When it seemed that everything was clear, I went back outside to asset if there has been any damage. As I looked around, I saw no bodies, and no one inside had been hurt. The buildings were all standing, and had received no damage. But as I looked up the street towards my right, I noticed that cell towers and power lines were all bent to the ground. I saw one or two trees that were bent in the process.

The weird thing is that after I had awakened, and pondered on the dream for a few minutes, I went back to sleep, and the dream repeated a second time!

But it didn't stop there.

About two weeks ago, while praying in the middle of the night, I fell asleep and found myself in a dream where I was looking up in the sky. Again, I saw some type of detonation go off high up. And once again, I saw this gray smoke coming from it and began to fill the sky.

"Do not forget the things that I have shown you since 2011."

I was trying to get off at 2016, but every time I attempted this, I'd end up on the wrong floor. Finally, I decided to get off at 2017 because I figured it was just a couple of weeks away anyhow.

When I got off, I found myself in what seemed to be a city park. It was a warm day, but everything around me was chaotic. There were guards, police officers, and the military patrolling everywhere. Some were spraying stuff down with what looked like water. I didn't see any civilians walking around. A man dressed in military uniform yelled from across the way.

"Hey! What are you doing here? How did you get here"

Frightened, I stumbled on my words to answer him. The man quickly walked over to where I was standing.

"How did you get here?" he asked again.

"You don't know about the detonation in the sky?" the man asked in a condescending tone.

My eyes widen. "It happened? It.....it really happened? I saw this in a dream! I had three dreams about this!" I exclaimed. The man looked confused for a second, then he told me that I needed to leave.

I hesitated putting this out, but decided to do so after seeing this event four times. I know that since the election, many in the church have put down their swords and swear that peace and safety has come; and this is a dangerous illusion.

As always, take these things to prayer.