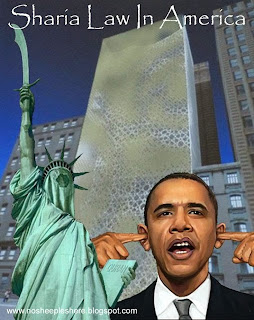 Last week I had a dream. In this dream I was walked into a convenience store with my  mother. The store was small as any convenience store would be. I walked up and down each aisle, browsing the items on the shelves. I noticed that at the end of one aisle, there was a stand with homemade honey. They were in small jars and had handwritten labels on them. I walked over to the stand and saw that at the top it had a sign made out of cardboard. On this sign it said; "Support Islam."

At this point, a Middle Eastern man with his wife and two sons, walked into the store. I could tell they were muslim by the clothes the wife was wearing. The peculiar thing was that the two boys (which looked be be around the ages of four and eight), had on kippahs (or yarmulke. For those who do not know; these are the little caps that the Jewish men wear). The father spoke and said to his sons; "Allah requires us to be pure and live holy. We must make sure we are following his rules and living holy." But all the while he was saying this, the man keep looking over at my breast. I was paying attention to this and when I would look over at him to make eye contact, he would quickly turn his face to the side as if he was avoiding something despicable.

Next, I looked over towards the cashier that was running the store. He looked to be middle eastern as well. On the front of the cash register, there was another cardboard sign; it said "Sharia Law." At this point, I was on the opposite side of the aisle as the man with his family. I blurted out; "Allah is Satan! Mohammed is in hell! Jesus Christ is the only answer!" Everyone was quiet. Finally the man at the cash register broke the silence. "No one disrespects the holy prophet!" he exclaimed. But I repeated again what I said the first time. I looked around the small store and noticed that my mother had left. When I looked towards the door, I saw a mob of men bust through the door. They all had leather whips in their hands. They were coming for me!

The funny thing was, I quickly walked down the aisle and went straight for the door. I walked right through the crowd without them laying a single finger on me. It was as though I was invisible. I thought about the times when Jesus would slip through the angry crowds after he spoke. I found myself outside on the street. I looked ahead and saw my mother walking. I paced myself to catch up with her, but I only got close enough to speak. "Mom, why did you leave?" I asked. "They were going to beat you." she responded. "But you are safe now." The strange thing was that she never turned around to look at me; she just kept walking. I noticed her white, almost iridescent dress she had on. It glowed softly, like a guide for me.

I started looking around the area where I was. That's when I noticed these dog-like creatures roaming the streets. They were black with cat eyes, and seem to be disappearing and then reappearing in different places. They were evil spirits! I looked up at a billboard. I saw the face of the president on it. Next to his face was a caption that said; "Support Sharia Law." I stopped. I looked up to the sky and said; "Lord, what are you showing me? Where am I?" At that moment, I saw the top of a familiar building. It was the Empire State Building! I then knew I was in New York. My dream ended.

Saints, roughly two years ago, I had a couple of similar dreams to this one. They involved me being in the midst of muslims and calling out the name of Jesus as the one, true God. In one dream, I even prayed for several muslim women, and through there healing, they accepted Christ as their savior.

The Lord has let me know that Islam will increase in this nation at a rapid speed. This is in preparation for the beast to come forth. We know that "Chrislam" (the marriage of Christianity and Islam) is on the rise today. We have a pope who is adorned by the muslim people, and is pushing the idea of "peace" between the two religions. We have a commander in chief that is a muslim at heart. This deceptive spirit    is being lorded over our nation. And between that and the continuous increase of immorality and wickedness in this nation, we will see the persecution of Christians just before the Rapture. I want you all to be prepared, and stand strong. We must know that as it began, it will end. We are reverting back to the times of the first century church. It was a time when the true believers were meeting in homes and secret places, a time where being a Christian was hostile. But remember that our brothers, the Apostles, continued to spread the gospel, no matter what the cost. So we too, must be bold and confident in Christ. Know your authority (The Word), put on your armor; for we wrestle not against flesh and blood. Let us be in encouraged, and therefore encourage one another. The finish line is in sight. Our Bridegroom is coming!
Mena Lee Jones
Faithful Walk Healing Ministries
Posted by Mena Lee Jones at 3:24 AM 1 comment: