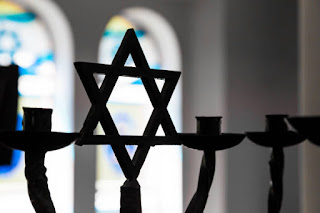 I will share a dream I had a few nights ago and the interpretation that the Lord gave me...

I was in a large synagogue. There were many people there, of all ages, and we were all busy packing. I remember seeing a large blue tarp that was neatly spread out on the floor up against a wall. On it were neatly place Jewish artifacts; several large blue and brass menorahs, books, and Torah scrolls among many other things.

I thought to myself that I needed to add to it a stack of bibles that I saw in a corner.

There was light chatter and everyone seemed to be moving at an even pace. At one point I stopped to observe all that was taking place in front of me. I was instantly filled with deep emotion: I was leaving the country. We were all leaving because it was no longer safe to stay....we all had to move to Israel.

As the reality sunk in, I felt a combination of excitement and sorrow.

Before I reveal what the Lord said to me, I want to share a second dream that I had two days after the first...

In my second dream, I found myself in a chaotic scene. Someone was confronting me, and as I turned to walk away, the person shouted, "I know you're one of them....but how?"

I quickly turned around, and with my hands cuffing each end of the collar of my shirt, I violently ripped my shirt open to reveal the two necklaces that laid hidden across my chest (I wear two gold chains; one that has a cross mounted inside of a Star of David, and the other is the name Yeshua written in Hebrew). I shouted back, "YES, I AM ONE OF THEM!"

I could see that the person was slightly confused by the color of my skin, but I also sensed grave danger approaching if I revealed how I had Jewish roots.

As I emerged out of the first dream, I felt all the emotions of joy and sorrow. I laid in bed contemplating all that I had dreamt.

At first I thought it was an odd dream and almost dismissed it immediately.

"Lord, you've given me my assignments for this next season, and I know it doesn't include me moving to Israel...and I have no desire to go there."

But the Lord began to speak just as those words crossed my spirit.

"Tell my children that antisemitism and violence will rapidly increase in America. It will intensify to the point where many (Jews) will flee for cause of safety. This must come to pass, this WILL come to pass, for it is written."

Thus says the Lord God: "I will gather you from the peoples, assemble you from the countries where you have been scattered, and I will give you the land of Israel." - Ezekiel 11:17

What many Christians don't realize is that Israel becoming a nation in 1948 was not the total "fulfillment" of the scriptures; it was only the beginning.

Also, we must remember that the scriptures tell us that ALL nations will turn against Israel; this will include the United States.

And it shall happen in that day that I will make Jerusalem a very heavy stone for all people; all who would heave it away will surely be cut in pieces, though all nations of the earth are gathered against it. - Zechariah 12:3

As with all things, take this to prayer for the Holy Spirit to reveal and confirm.