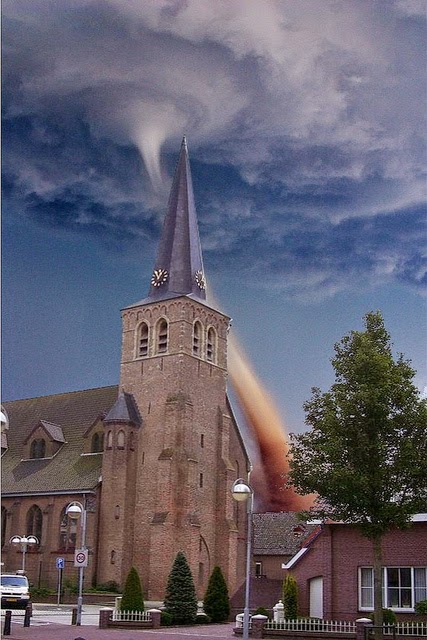 I was visiting a church with my family. The church was pretty packed, so much that my family could not sit together. There were only single seats left, scattered here and there throughout the building. I found a seat next to a pastor that my husband is acquainted with. When I took my seat, I looked around the audience, trying to pinpoint a speaker or pastor; but there was none to be found. Suddenly, an awful rumbling sound fill the room, and the walls and floor began to vibrate. The vibration was so strong that the pews on the floor began to scoot forward.

I jumped up out of my seat and yelled; "What's going on?" A lady shouted; "It's just the air conditioning unit...everything's alright!" But I knew that wasn't the AC unit; the sound was coming from outside. So I ran towards the double glass doors and proceeded outside. As soon as I got out, I looked to my right, and down the street (roughly five miles or so away), I saw a huge black clouds in the sky. Suddenly, a massive black tornado formed, and it was headed straight for the church.

It was then I noticed that several other people had followed me outside; I yelled for them to go back in. I yelled out that a tornado was headed our way. Some of the people began to panic and wanted to leave the church. But I instructed them not to leave. I told them it was safer inside, but that we had to go underground. I went back inside and started warning the people about the storm. I told them that we had to seek shelter immediately. But only about a third of the people listened to me. The other two-thirds said; "Oh, that storm is not coming this way. It's going somewhere else, not here. We will be fine!" No matter how much I pleaded, I could not convince them of what was coming. I called out to my three children that I saw sitting on a pew together. They came, and together with the other third of the church, we went into a bunker that was below the church. My dream then ended.

When I woke up, the Lord immediately began speaking to me about the dream. He said; "Mena, what you saw represents a storm of demonic activity and persecution coming to the church. The majority of the church is blinded and unaware of the destruction coming their way. They believe that it can't happen to them, or it won't happen in this nation. But it is coming and behold, it is already here. Those who are wise will be alert and will hear my voice for wisdom and instructions. I will keep my Bride safe. Not everyone who is in the church is my Bride. Not everyone who claims to know me, actually belong to me. Many say it, but their hearts are dark, their minds are filled with fifth and perversion, and their robes are stained with desires of this world; pride, arrogance, greed, gossip, and deception. It is time to awaken from their drunken slumber. Warn the church; The Bridegroom cometh, but only for the holy."