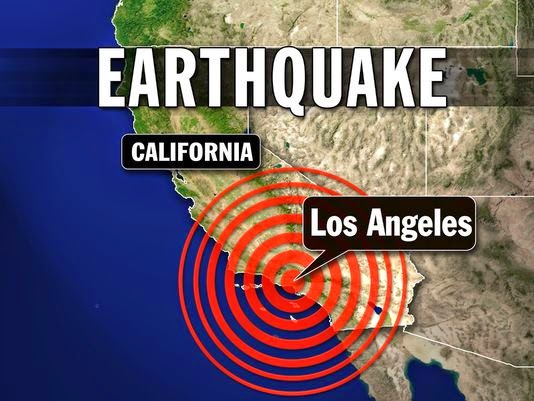 In the wee hours of this morning, the Lord came and presented two cities in front of me. The first one was Lima, Peru. The second city was Los Angeles, California.

As I was viewing these cities, I saw just what an average day would look like. People going to and fro, cars on the roads, businesses running etc. So  I asked the Lord why was He showing these two cities to me. He answered and said; "Earthquakes are coming to these cities." I did not see the magnitude of the earthquake for the city of Lima, but I saw the one for Los Angeles; it was 6.9.

The Lord also gave me a scripture regarding these two cities; Psalm 24.

In this famous scripture; "The earth is the Lord's and the fullness therein..." it talks about the Lord forming the earth (as land) upon the seas/waters. Both Los Angeles and Lima are coastal cities, and they both sit along the Pacific Rim, which is apart of the Ring of Fire. As the scripture continues, it talks about who will enter into the Lord's sanctuary; only those with pure hearts, who do not worship idols, and who do not swear deceitfully.

Lima is heavy in idol worship and known for its witchcraft. Los Angeles is heavy in idolatry of people, fame, possessions and money. All of which would cause one's heart to be impure. Swearing deceitfully can fall anywhere from lying under oath to broken marriage vows. In this scripture, the occupants of both cites can be found guilty.

Now I know there are MANY prophetic words/dreams/visions out there of like a nine or ten point earthquake hitting Los Angeles. But let me remind you that the last one to devastate that city in 1994 was a 6.4, and the one that tore up San Francisco in 1989 was a 6.9.

I don't know when these things will come about, but this is what the Lord has given me. He also ended with saying; "I Am Coming Very, Very, Very Soon!"