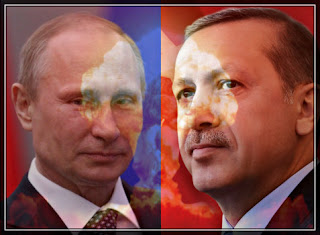 A couple of weeks ago I was given what I call a "Daniel" type vision. I say this because most of the dreams and visions that Lord gives me are direct; without too much symbolism. But this was not the case with this one. So pray for wisdom and discernment, as I did, regarding what I'm about to share.

It was about the fourth watch, and I went into a vision. In it, I saw three buildings. All three were made exactly the same, the only difference was their height.

On the top floor of the shortest building sat Erdogan, and he was representing Turkey.

On the top floor of the middle building sat Putin, representing Russia.

The tallest building represented the United States, but there was no one seated at the top floor. There were people in the building; all US citizens, but no one was representing us.

I then heard Putin and Erdogan talking. They were angry. It was then that I realized that we (the United States) were being blamed for the explosions. However, we weren't the cause of it.

Next, Putin formed an alliance with Erdogan, and they called to other buildings to stand with them. I wasn't given the names of the people or countries in the other buildings. But it was only a couple more that joined in. Together, they began to make plans to bomb our building, and march in to take our people.

My vision ended with our building being invaded.

If you don't already know, war world three has already begun. The media has just been covering it up with things like the Brexit, the elections, scandals, and reality TV. The fact is, Putin has recently made several threats, and then has moved on them. And in the process, he has warned the United States not to stand in his way. I also found out through research that Russia has rebuilt their alliance with Turkey after their recent failed coup.

There have been many dreams, visions, and prophetic words from people like David Wilkerson and Dumitru Duduman, who have seen Russia invade the US.

In October of last year (2015), the Lord showed me a map of Israel and Iran. He instructed me to begin to pray because Israel was going to strike Iran. He said, "War is about to begin."

I asked the Lord, what war? And He responded with, "Gog and Magog."

After this, I went through a period of three days of dreams where I saw war planes; bombers and fighter jets being launched in various places, including the United States. I also saw missiles being dropped on us.

I want to speak on another thing that I heard two nights ago. It was odd thing to here, yet clear as day. I heard, "Tell the Queen that in forty days, great change is coming to the UK."

Now I know I don't have access to the Queen of England (LOL), but I understood that the change wasn't for the good. There's a great shift coming to that area, that will impact them in a major way; even their way of living. As always, take these things to prayer.

Saints, as always
Stay Alert. Be Ready. Look Up!