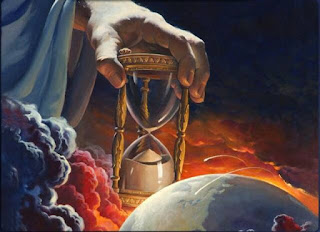 In 2011, the Lord Jesus gave me a dream where he took me to a terrace overlooking the Golan Heights in Israel (mentioned in The Watchman On The Wall Report video -April 2013). In the dream, He showed me a war that broke out in a valley. Above, in the sky, I saw the numbers 4112. I didn't understand the meaning of these numbers at the time, however I did understand that a war was coming that was going to involve Israel.

Last month (May 2013), Israel began sending troops and military enforcement into the Golan Heights, due to an ever increasing threat from Syria. You can click on the link below to read an article on this.

Saints, I want you to know that the Rapture of the Bride is literally at the door! This war that is about to break out is the war mentioned in Psalm 83 and Isaiah 17. In Isaiah 17, it is prophesied that Damascus would be destroyed over night. In Psalm 83, Israel goes to war with what is now known as the Arab nations.

Saints, both of these writings are prophesies given from the Lord are Pre-Tribulation period. In other words, it is not indicated that these wars would take place during the Tribulation. It is separate and before Armageddon mentioned in Revelation 16. However, they are marked for the last days.

There is a prophetess by the name of Choo Thomas that resided in Tacoma, Washington. She wrote the book; "Heaven Is So Real" where she shared her visitations with Jesus. Choo recently died in April 2013. I was shocked to hear of her death. But in January of this year, Choo sent out an urgent message that the Lord had given her for the saints. In the message, she talks about Israel and the Psalm 83 war. I want to remind you that this word was given five months before Israel ever made a move regarding Syria.

The Fifth Revelation by The Lord:


An impending war coming to Middle East, involving Israel and a conglomeration of nations


To specify this further, The Lord has twice presented to me the current Israel Prime Minister, Benjamin Netanyahu. He then showed me that Israel’s Prime Minister, Benjamin Netanyahu is going to play a very critical role in the imminent war involving Israel (The Psalm 83 War). When you read the bible, you find that this war and tension in Middle East culminate into The Anti-Christ instituting a peace treaty between Israel and its adversaries. We also that in the middle of the Great Tribulation period, The Anti-Christ breaks the peace treaty. This peace treaty must therefore take place very, soon because The LORD has already shown me that the Anti-Christ is here. The Lord also confirmed that the leader who will lead Israel into the Psalm 83 war is Benjamin Netanyahu.

Daniel 9:26-27 “The people of the ruler who will come will destroy the city and the sanctuary. The end will come like a flood: War will continue until the end, and desolations have been decreed.  He will confirm a covenant with many for one ‘seven.’ In the middle of the ‘seven’ he will put an end to sacrifice and offering. And at the temple he will set up an abomination that causes desolation, until the end that is decreed is poured out on him.”

This implies that The Lord gave very clear and explicit signs to look for to signify the season that will characterize the very last stages of the End-times. We have been in this period known as “The End-Times” for some time, but right now we are at the very very very last stages of this period as we have shared and discussed above. Follow what The Lord has now revealed as He pours out His Holy Spirit through Supernatural dreams and thereby opening up through prophesies.

Another person, Pastor Sori Park was visited by the Lord multiple times between January 2007 and February 2008. In her visitations, she was told to secrets of the end-times and what to look for. I will list a few below, but when you have time, I encourage you to look at her videos for yourself. The powerful thing for me is that she confirmed what I spoke in in my Watchman on The Wall video that I posted in April.

1. The Catholic Church will usher in the "One World Religion".
2. The pope will set up the worship of the image of The Beast. -This has been in the making through the worship of statues of Mary and other saints.
3. China will align and assist Arab nations in a war against Israel.
4. The Lord said; "When the war with Israel begins, know that the Rapture is near."
5. The Lord also said; "When the Rapture happens, NASA will give an explanation that there was a massive UFO invasion and that the Christians and children were abducted."

In my next video, I will be going over chapters in Zephaniah. The Lord gave me this book to study back in April. He told me I would find America and Israel in this book: and I did. I keep going back to it because so much has unfolded the is mentioned in these scriptures.

Saints, lets be alert, sober at all times. The trumpet is about to sound. And only those who are pure in heart and eagerly awaiting Him, will hear it.